My Jesus, My Healer! 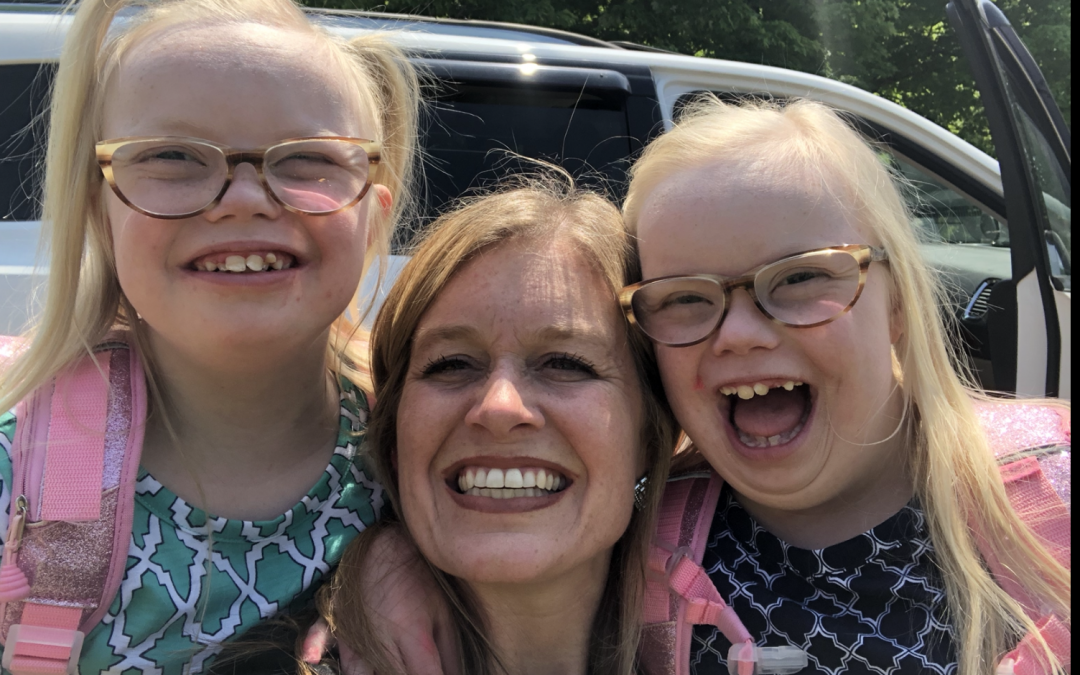 Let me introduce you to my twin girls: Madalyn and Meredith. Aren’t they precious? I tell them they are princesses. Jesus’ princesses. Madalyn is in green and Meredith is in Navy. I wanted to share a healing testimony that happened to Meredith on Sunday morning!

One thing that is tough about winter is the many sicknesses that get passed around. I’ve heard the flu is very widespread in our area and one of my children, Collin, had it 2 weeks ago. So I have been trying to be extra careful to wash hands!

On Saturday night the kids and I were having dinner with my mom and sister, and I noticed Meredith wasn’t eating and didn’t seem to feel good. On the way home from dinner she threw up in the car. Man!

I know all the moms out there can identify with me that when your little one has thrown up right before bed, you feel on heightened alert because you’re not exactly sure if or when the next episode is coming! After a quick bath, she fell right to sleep in her bed. I stood beside her bed and thanked Jesus for his healing power and for sweet peaceful sleep.

She slept til 5…which is about the time I get up to sit with Jesus every morning. I immediately noticed she had a fever. I sat with her in the den and held her. After a sip of water she threw up again. As I was sitting there thinking about if this could be flu, fear came busting upon me because I thought, “Oh no, she won’t even be able to hold down Tamiflu.” (Which helped hurry the process along in Collin. He was feeling normal in 12 hours after taking it.)

In that moment, the Holy Spirit took me on a rewind of the previous day. Before we had dinner with my family, I had met with a friend of mine and at one point I had been talking about supernatural healing. I shared some testimonies with her about seeing God heal people- sometimes praying one time for them, and other times praying multiple times in a row. I shared a testimony I heard Robbie Dawkins tell once when he gave a message about healing that involved his own children praying for a boy their own age who was paralyzed in a wheelchair. (They were elementary school ages). The boy got up and ran after the kids kept praying over and over without giving up. Something like 15 prayers later, he was healed. Glory to God!!! After tons of great conversation, I headed home.

Once home, I laid down a few minutes and fell asleep. I had a dream that a very sketchy character was taunting me and telling me he was coming after me. When I woke, I knew it was a way the enemy was trying to intimidate me. But I responded by looking to Heaven, thanking my Father for calling me DAUGHTER! I have been saved and covered by the blood of Jesus, and given the right to be a daughter of the KING.

Then I realized. This was a scheme of the enemy. Something rose up inside of me. I began to feel as bold as a lion. I started pacing back and forth in my living room, reciting scriptures that were coming to my mind. Scriptures such as:

“No weapon that is formed against you will prosper; And every tongue that accuses you in judgment you will condemn. This is the heritage of the servants of the LORD, And their vindication is from Me,” declares the LORD.”

“He personally carried our sin in his body on the cross so that we can be dead to sin and live for what is right. By his wounds you are healed.”

“The wicked flee when no one pursues, But the righteous are bold as a lion.”

I began praying in the Spirit and began to declare and decree healing over my little princess. I thanked the Lord for complete healing from every virus, bacteria, and disease of any kind. I commanded her fever to leave and I spoke life over her little body. You see, I remembered WHO I WAS. As followers of Jesus, we are children of the Living God. We have ACCESS to Daddy’s throne room.

I went and sat next to her and felt her head. Her skin was suddenly COOL to the touch! Over the next 30 minutes she “seem to come to life”, smiling and laughing and playing again. She never threw up again and ate chicken tenders and macaroni for lunch with no problem. Our God reigns!

I feel like the Lord wants to change our traditional way of thinking that if we get sick, thats it…”we’re sick” till it runs its course. I want to challenge this. The Bible says in John 10:10 that the THEIF (satan) comes to steal, kill, and destroy, but Jesus gives everything in abundance, more than we expect–life in fullness until we overflow! As children of God, we have a Daddy who is the MOST HIGH in all the universe! He is a supernatural God… and He specializes in the natural impossibilities!! And. He adores YOU.

Jesus told his disciples to make more disciples… teaching them ALL that He had taught them. One big thing He taught them was how to spread the word about the gospel of the Kingdom. Jesus said:

“Heal the sick, raise the dead, cure those with leprosy, and cast out demons. Give as freely as you have received!”

He also sent out 72 more disciples and said:

“Heal the sick, and tell them, ‘The Kingdom of God is near you now.’”

Jesus came to save us and also show us what was possible because of who we are in Him. Look what Acts 10:38 says about the life of Jesus:

“And you know that God anointed Jesus of Nazareth with the Holy Spirit and with power. Then Jesus went around doing good and healing all who were oppressed by the devil, for God was with him.”

What would happen if we as the people of God got a hold of this amazing truth? That God’s will is healing, we just need to stand on the truth of the Word of God until our faith becomes sight?! If no one accepted sickness when it hit (by coming under it by agreeing with it instead of fighting back in prayer and standing on the truth of the Word?) IT IS BY JESUS’ STRIPES WE HAVE BEEN HEALED. HALLELUJAH!! Just believe. The Holy Spirit lives in you. As a child of God, you are created to be naturally supernatural too!

For more testimonies about healing and how to hear God’s voice of Love and Truth, pick up a copy of my new book The Voice of Truth. (Ashley- Edwards.com)